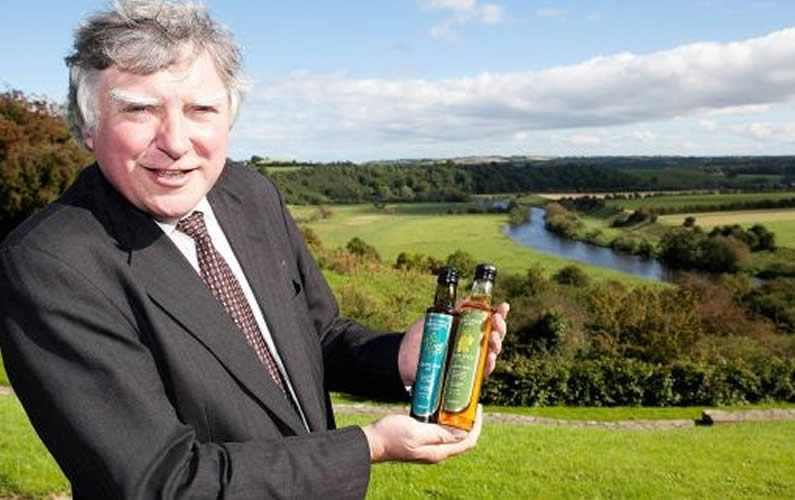 If your day job had you up to your horsehair wig and gown in convoluted legal briefs you might be forgiven for getting down and dirty in the evening. For Senior Counsel and former Attorney General John Rogers, wellies and waterproofs have been an alternative mode of dress since acquiring his farm at Clewbane on the banks of the River Boyne over 20 years ago.

Since then he has run the place as a viable enterprise, first with a suckler herd, more recently with tillage.

Now the barrister-cum-gentleman farmer has added another string to his bow, having just launched Newgrange Gold, a range of premium rapeseed and camelina oils for cooking purposes.

So what prompted his move into seed oil production?

“I was looking at trailer loads of fine rapeseed leaving my farm and I decided that I had to do something with it,” Rogers recalls. “When we tested our oil we found that it had so much goodness in it. Analysis revealed that it contained very high levels of Omega and this was the catalyst for me to produce a quality Irish oil that is also healthy.”

As he poses with his new products against a backdrop of Newgrange and the Boyne valley, Rogers reflects on how he almost missed out on buying this “very special place” to which he regularly escapes from the demands of his day job.

“It was 1991,” he recalls. “I was in the law library and a friend of mine, Hugh Hardiman, said ‘Did you see Crewbane for sale in the paper?’ I hadn’t, but as soon as I did I recognised the house from my numerous walks along the southern bank of the River Boyne.”

Though born in Dublin, the Rockwell and Trinity College graduate had spent much of his childhood in County Meath and on regular visits back there had developed a deep affinity with the land.

Rogers immediately drove to Crewbane. “When I saw the view over the river, I realised what a unique place it was.” He then brought his father to see it and they decided on a price. Rogers ended up buying the place at auction for “just a little more … I’d have been mad not to go for it.”

Crewbane immediately became a rural retreat for Rogers, his artist wife Beth and their three young children, Jack, Kitty and William. Always passionate about ancient history, Rogers now found himself literally surrounded by it in the shadow of Newgrange, with the Neolithic burial mound of Knowth within sight of his front door. An archaeological survey revealed that the farm was originally part of the ancient kingdom of Breagh, which once encompassed the greater part of what are now the counties of Meath and Dublin; and to Rogers’ delight a souterrain (an underground passage used for storage and shelter in prehistoric times) was discovered within yards of the farmhouse when a tractor working the land dislodged its covering stone. Rogers has since installed a ladder under the manhole to the souterrain and enjoys showing visitors – and curious journalists – his link to an ancient world.

As his children grew so did the demand for space. As well as increasing the farm’s acreage with the acquisition of land on both sides of the River Boyne, Rogers rebuilt the farm lodge using its original stone. Over the years it has hosted countless teenage parties, and was an ideal place for Rogers’ kids and their pals to adjourn to after the likes of Springsteen, Madonna and The Rolling Stones played at nearby Slane. With the addition of a marquee it was also the venue for his daughter Kitty’s wedding on Jun 6 2009.

Meanwhile, having honed his interest in farming at weekends and during school holidays in Crewbane, Rogers’ son Jack went on to study Agricultural Science in UCD.

Though he has since followed his father down the legal path and is now a junior barrister, Jack hasn’t ruled out returning to the land – particularly in view of his father’s latest venture.

For the product launch, Rogers asked Jenni Glasgow and Reuvan Diaz of the Eastern Seaboard Bar and Grill in Drogheda to come up with a lunch menu incorporating his plain and flavoured rapeseed oils, and camelina oil, a lighter tasting nutty oil particularly suited for salad dressings and marinades.

The result was a medley of corn chowder, lobster and pig’s cheek terrine followed by a sweet and spiced rape and camelina seed infusion with seeded cake bars.

“I am very proud of our range of Newgrange Oils,” says Rogers.

Newgrange Gold culinary oils are available in outlets such as Donnybrook Fair, Mortons of Ranelagh and Nolans Clontarf as well as several supermarkets nationwide.